So I went to Frankfurt, Germany and London, England for four days each. It was for my MBA field study trip with MCNY. I find my personality paralleling with the pessimistic antisocial Germans. We think a like – Sleek, Financially savvy, and close-nit. The financial city was really enjoyable. Europeans in general aren’t rude just a bit more distant and blunt. I like that. Americans are so use to being treated special with our 100% customer service, since most people are working below wages.

However, this is what strikes me curious – If Europeans are paid fair wages and you aren’t suppose to tip them then how come the majority of our servers came across as dulled by their job? Most people despise their jobs anyway, but it shows that a more capitalistic culture works even when working on tips. You are forced to smile so much you can fake your happiness into collecting more gratuity.

London, England was much like New York City but without the mass landscape of towering buildings. I enjoyed the simple plain colorful housing in Germany and England. It’s too bad American builders are so cheap and short thinking. I do believe in building to last generations. I suppose American culture/history just doesn’t run deep enough except in historical cities where some buildings have lasted due to founding settlers being European with this mindset.

Another very notable thing I saw was the cleanliness and enforcement to recycle everywhere. It was impressive. I suppose when you are forced to be a large number of people in a smaller amount of space you must not waste and keep your space clean.

On a personal note with the 30+ MBA students I went with I felt rather distant myself from the other students. Loneliness haunts me. One thought that kept coming to me is to stick with my trading. I need to work harder on it. I really wanted to sit in those first class lazy boy seats on the airline. Trading is the only thing I’d say I enjoy and stays fresh – I just need to work hard and get a bit lucky. 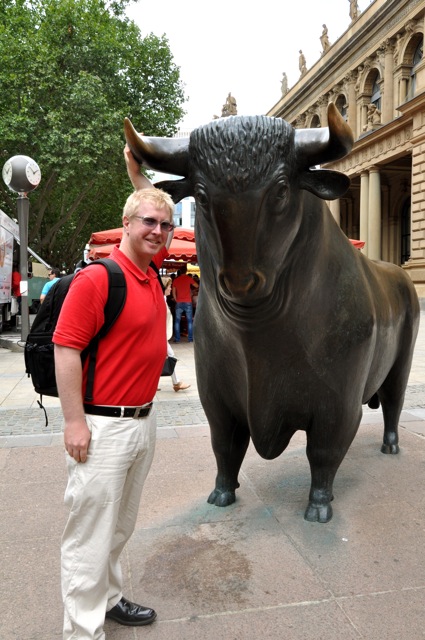 Me grasping the bull at the Frankfurt Stock Exchange

This entry was posted on July 15, 2011 by Paul. It was filed under coming back to trading after years, european culture compared to americans, germany and england mba trip and was tagged with mba european field trip.

Stuck in your mortgage and can't make the payments? We also offer to take over your payments to relieve you of your monthly payments, help sell your home, or purchase it in cash quickly. We offer options for all types of home sellers that need to sell fast. Fill out our form and contact us today to learn more how to sell your home fast to us.